One Sunday evening in early April, Zoya swallowed a tiny cube of ice while having fresh lime water. She hit the panic button – she said she could not breathe and her tummy was hurting and that she had to see her doctor, Pankaj Vohra, immediately. We tried our best to calm her down and distract her, but nothing worked. She insisted on going to the hospital and meeting her doctor. We explained to her that Sunday is usually an off for doctors and that they would come in only if it were an emergency. So she insisted we call him home.

Praveen took her to the local pediatrician who told her that the ice had melted and she would soon pee out the water and that she could eat normal food. Zoya came back home all happy, passed urine and was thrilled that the ice was out. But within minutes she got panicky all over again and insisted on calling Pankaj Vohra. Finally, Vikram had to pretend he was Dr. Vohra and over the phone he told her to finish her dinner while he started from his house to ours, to check on her.

This small incident turned into a nightmare for us that lasted over a month and a half.

Dr. Vohra prescribed antacids and asked us to run some regular tests with her blood, urine and stool.  All the reports were normal.

Within 10 days, Zoya was off solid food completely and drinking only milk each time she got hungry. Her energy levels did not fall, but she did get very cranky. Each time I tried feeding her she would howl, complaining of ache in her stomach.

Praveen had to finally leave for Assam on a shoot. I was 8 months pregnant.

I was at Dr. Vohra’s every two / three days. They ran several tests on Zoya. Everything continued to be normal or within what could be considered normal. There was nothing that could be pointed as a factor for appetite loss or stomach pain. He asked us to give her ice creams. Zoya was guzzling almost a litre and a half of milk and 8 ice creams a day.

Zoya is not a fussy eater and I am very happy about her appetite – all thanks to my mother who had insisted that I feed Zoya everything possible before she “develops tastes and preferences”. Her comfort foods are ham, curd, stuffed chapatis, plain rice, rajma, chips and chocolates. She was refusing all of this and so when she asked for milk and ice creams, I could not get myself to say no.

In the punishing summer heat, I had my office staff running helter-skelter some afternoons trying to find ‘pink coloured ice creams’ so that I could get at least one bit of anything solid down her throat along with the ice cream. We tried and tested so many flavours and eventually Zoya found love in raspberry duets. She continued to ignore the freezer section of the fridge.

And then my colleague said that tummy pain was the first sign of abuse in toddlers.

I was a wreck.

I spent 5 days trying to talk to my 3 year old daughter in ways that would give me some indication if she had been physically abused. I had no idea what to ask and what not to. And I did not want to fuel her already wild imagination. I read some papers online and spoke to Dr. Vohra too. But eventually had to trust my instinct and use a level head to decipher her answers. After all, at this age, fact and fiction overlap so much.

Zoya then refused to go to school. She would cry of tummy pain every morning. Most of the times I realized it was a tactic to not go to school, but one day her teacher called saying she was howling with pain in class. This I could not believe was one of her tactics, but the minute she was in the car with me, her pain had gone. Had something happened in school?

This was the most trying period of this no-appetite story. I could not sleep for more than 2 / 3 hours a night. I would just sit holding her in my lap, crying and whispering words of comfort into her ears. All kinds of thoughts and questions moved in and out of my head. I suddenly could not trust anyone around me, looking at everyone with suspicion.

I stopped sending her to school. I met her teachers and we tried to figure out if there was something in school that was bothering her and how we could get her back to class. She had been moved to the nursery section in the same school and there was less of play time and more stress on writing. So perhaps she was finding it difficult to adjust to this change. May be. Maybe not.

Zoya had lost just about a kilogram of weight and was sleeping well, but she looked rather sickly.

My health began to suffer and the next ultra sound showed the effect on the fetus – IUGR. It was just the stomach circumference of the fetus that was showing a retarded growth, the height and head circumference were normal.I was told repeatedly not to worry and think so negatively. But, it was just not possible to be normal.

Each time I heard “Ma tummy pain”, my blood would boil. I would want to scream and run away. I would want to break something. But actually, I would end up sending angry text messages to Singh to vent out my frustration.

Finally, after days of talking to her, I concluded that there was no abuse and Dr. Vohra too ruled it out. It was a relief and I must say a really, really huge one. When I look back, I think I could have taken any disease as an answer to the problem, but had it been physical abuse, I think I would have been shattered beyond repair.

So why was Zoya not eating and complaining of sever pains in her stomach?

An endoscopy was done to find out.

Dr. Vohra never prescribes antibiotics. He only gave her antacids and hunger inducing syrups. But after the normal endoscopy he stopped all medication and said let her be.

Then, the day after the endoscopy, while eating her raspberry duet, Zoya said, “Ma, when the baby comes, my stomach will be alright, the pain will go away”.

All I could think of that very instant was to get to the hospital and get the baby out so that my Zoya is normal, that her pain is gone, that she eats like before – dancing all over the house, jumping on the sofa, in the park, over her painting canvas.

Dr. Vohra advised us to see a psychiatrist. We did. I spent about 30 minutes with some junior doctors and Zoya in a room. They asked her and me a whole lot of questions. They asked her to draw, to which she made random lines on paper. And then came the questions about the baby.

It was a very painful moment in time.

No one could give us answers.

The psychiatrist told us this is regressive behaviour, she is anxious about the baby’s arrival and we should watch out for aggressive behaviour, She would be fine. In some rare circumstance she could try harming the baby if this persists. And so he prescribed a SOS medicine.

We never gave that medicine to Zoya. We just let her have ice creams and milk.

We moved the baby cot into the house and let her sleep in it. We got nappies and diapers and let her try them on. I packed my hospital bag and let her pack hers too.

And then one day, just as she woke up at 7 am, she asked for chips. It felt like having delivered the baby!

And since that day she has not had any stomach aches and her appetite is back to normal.

I saw tears in Zoya’s eyes when she saw Sumer in the hospital for the first time.

Of course she talks loudly when we ask her to not make noise. She disapproves of me feeding him so much milk that there is none left for her. She gets irritated when he does not grasp her hand.

But not once has she tried to harm him.

Zoya thinks the word Diddi has no authority and thus she calls herself “Didda”.

My instinct tells me they will be inseparable. 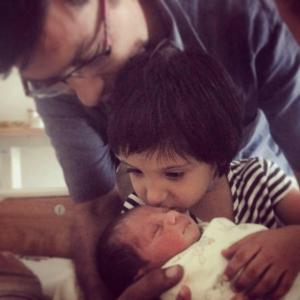